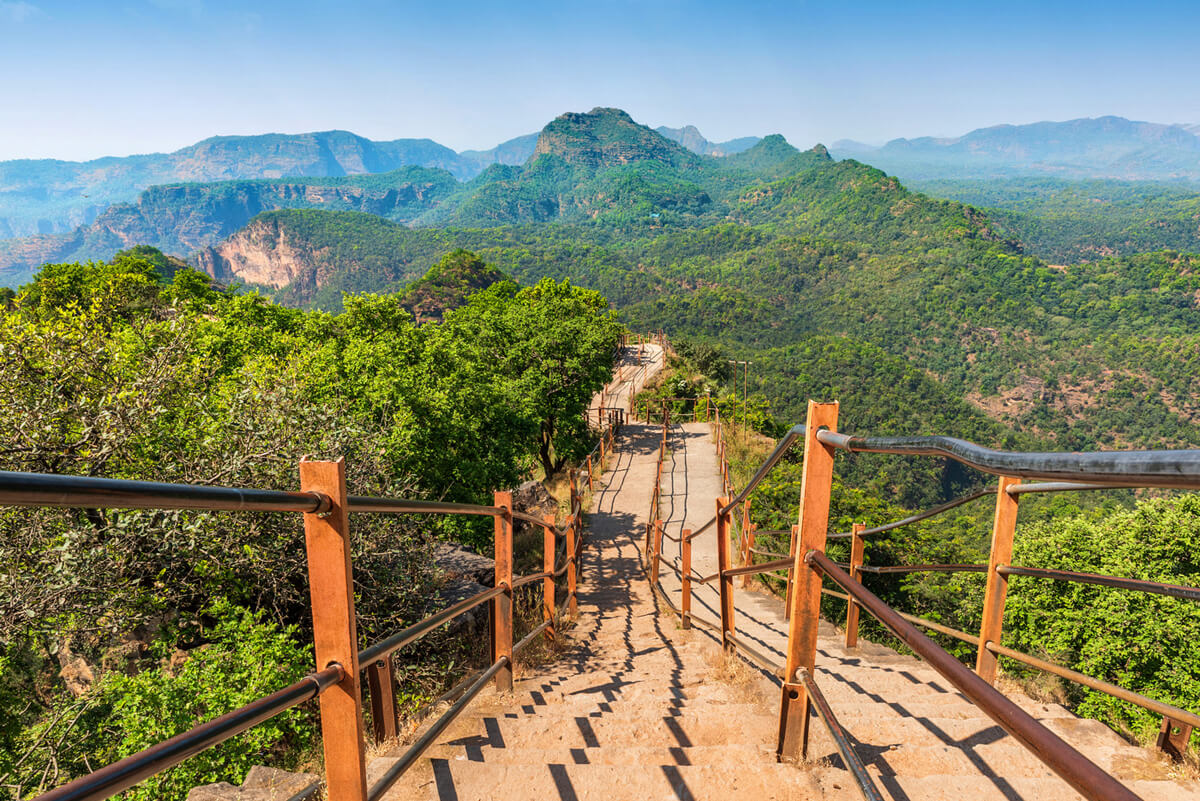 Pachmarhi a beautiful hill station lies in the central Indian state of Madhya Pradesh also known as Satpura ki Rani. Phenomenal beauty of nature, gushing waterfalls and historic depict are several things that make Pachmarhi a destination worth visiting.  Its exquisite location is in the emerald green valley of the Satpura Range. Astounding surroundings of this beautiful hill destination look more spectacular during monsoon. The drizzle on the green valley during monsoon makes it even prettier. This famous spot in Madhya Pradesh is known to have a rich biodiversity. Appealing hilltop offers an eye-catching view and peaceful surroundings to the visitors. It allows you to capture the greenery in every possible way. You can enjoy and feel the natural beauty of this place. Most people prefer Pachmarhi tourism after coming to know about this place because of its natural forests and hilly areas.

Famous Places to visit in Pachmarhi 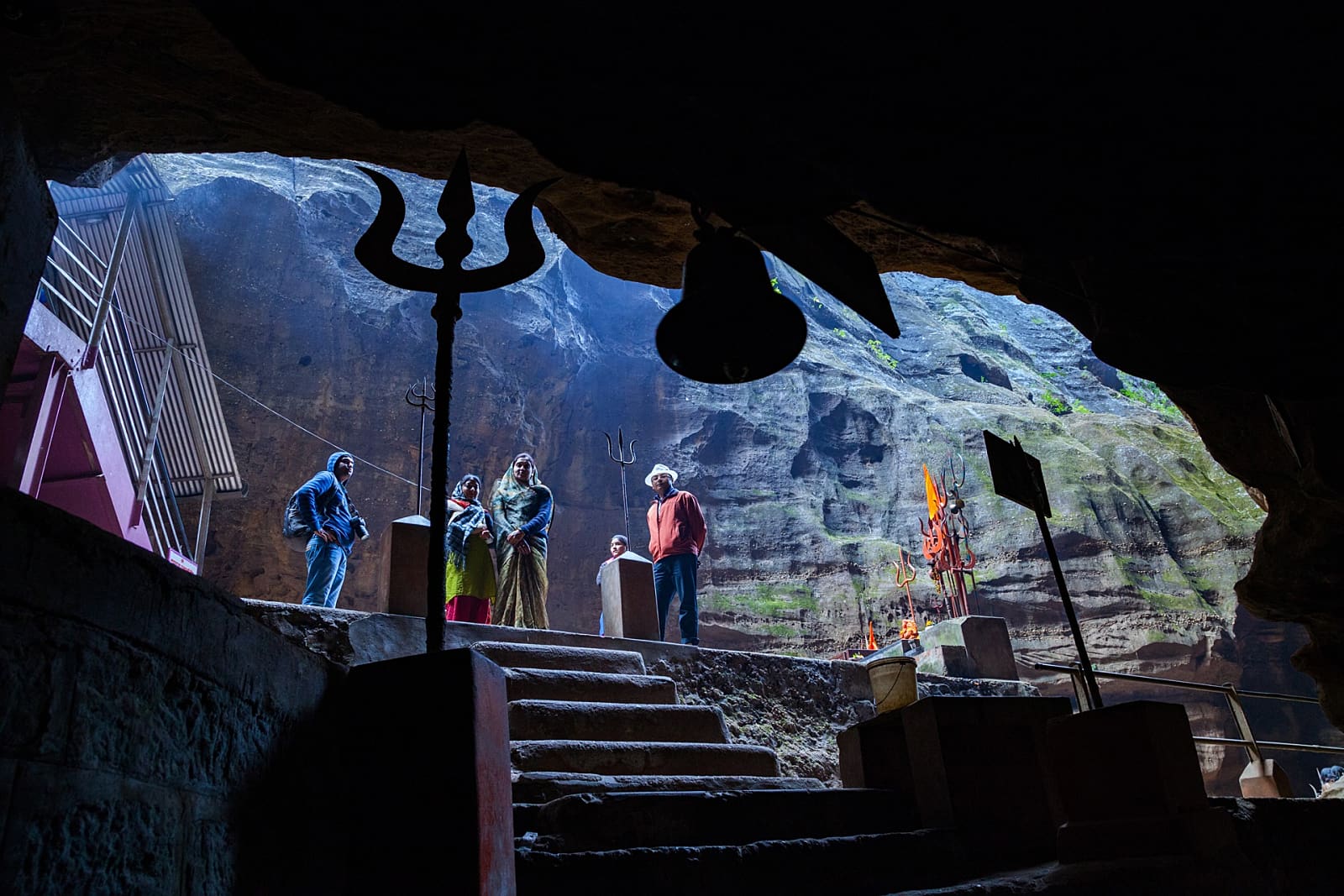 The Jata Shankar Caves in Pachmarhi are considered to be holy as they are universally believed to be the place where Lord Shiva concealed himself from the rage of Bhasmasur. The cave’s structures of a natural Shivalingam under the shadow of the colossal rock and the stone formation in the cave is similar to the mythological hundred-headed snake Seshnag. These caves are must-visit spot for shiv devotees as it gives a very different experience. 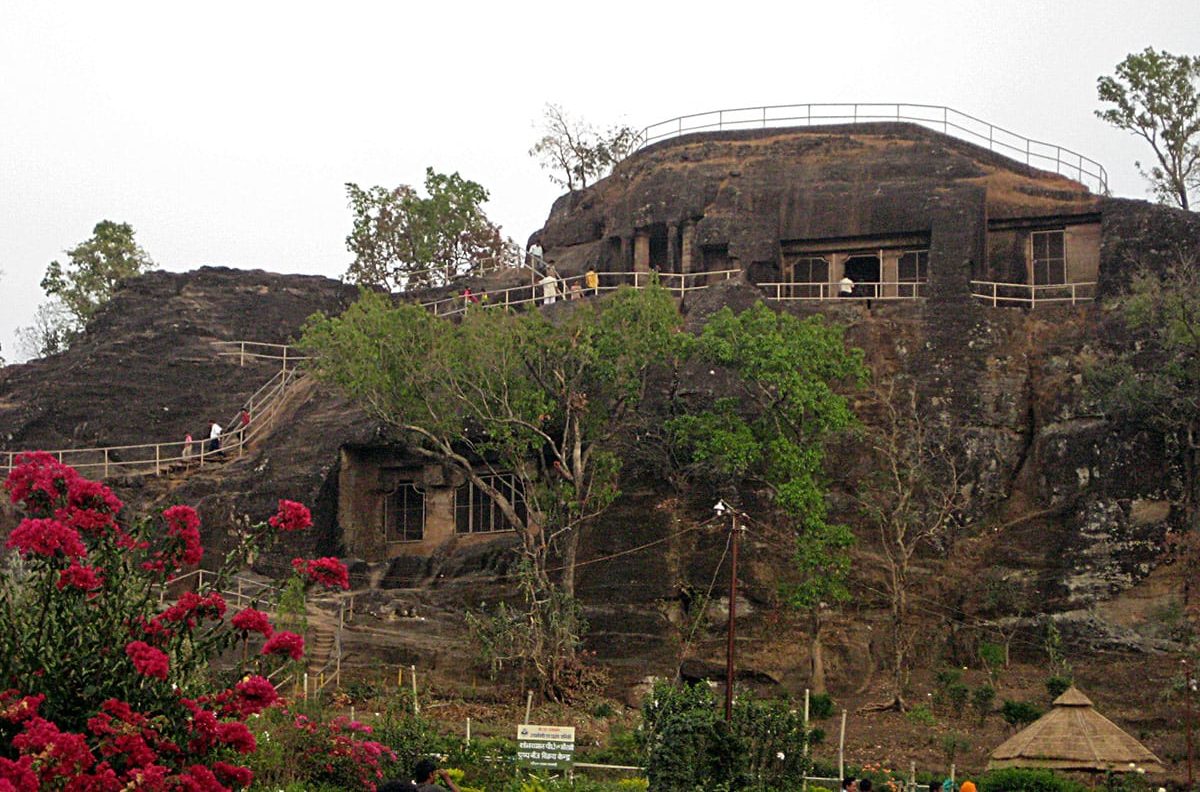 A group of five rock temples embellish with natural blossoming gardens and roughly sculptured columns is the most important spot in Pachmarhi. These attractive caves are shrouded with a number of stories belonging to various eras and were lastly chopped by Buddhist monks who used these caves for meditation. It is believed that this place serves as a shelter for the Pandavas during their separation period. They lived in these caves during their exile is the most common story hence; they got famous as Pandav Caves.

Distance – 2km from the city center 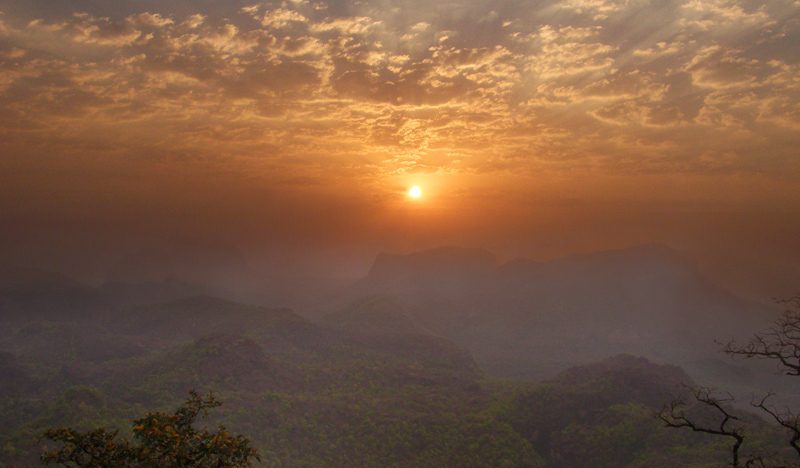 The highest peak in the Satpura range, Dhoopgarh hilltop is a popular spot that offers the visitors a beautiful sight for viewing sunsets and sunrises. Witness the mesmerizing view of sunset by reaching this place through trekking. The trekking route is very exhausting as it passes through some waterfalls and deep valleys. The best place to relax and take a closed glance at the beauty of this peak.

Distance – 10km from the city center

The most beautiful gorge is Handi Khoh which is 300 feet deep in the middle of a dense forest. It has a mythological history that is believed to be associated with Lord Shiva. Earlier it was believed that Handi Khoh has been a lake. An evil devilish snake, which was guarding the lake was killed by Lord Shiva and the outrage of battle dried up the entire lake and the vacant space took the shape of a handi(pot). Handi Khoh is famous for its serenity and old-world existence.

Distance – 4.5km from the city center 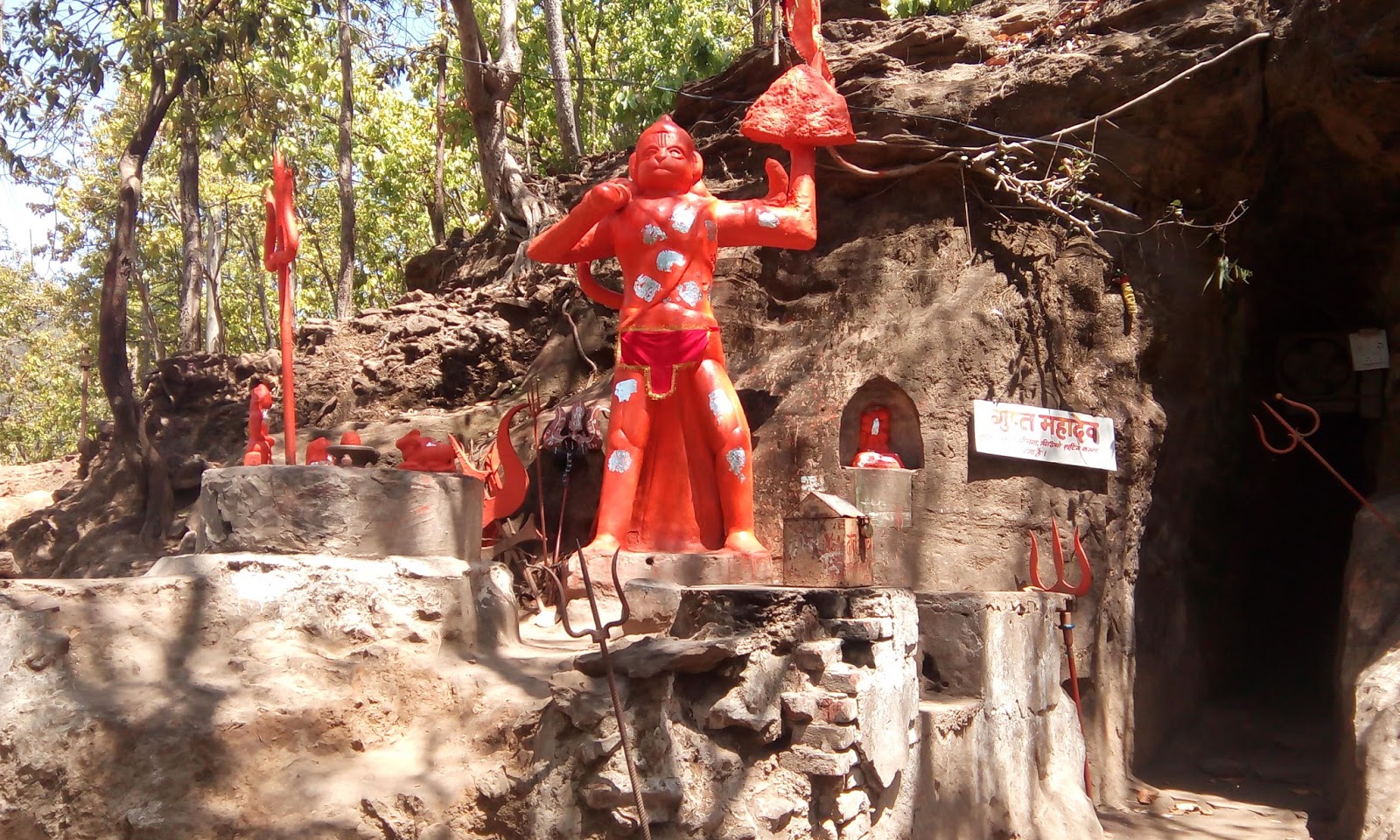 Gupt Mahadev is an interesting and mysterious spot near Pachmarhi where devotion meets adventure. The cave is narrow and windy, and one has to walk sideways through the 40 feet winding pathways to reach the center of the Shiva shrine where the lingam is worshipped. It’s not less than adventure to cross that narrow wall.

Distance – 12.5km from the city cente

Bee Falls is the most popular spot in Pachmarhi. Imagine how it feels to see the water tumbling from a huge height. You can’t help it but admire this engaging thing by staring the motion of water from a height. The waterfall is 35 meters high can be reached through a short trek. It is named as bee falls as the sound of moving water is similar to a bee. It is a famous picnic spot for the people who love to catch glimpse of waterfalls.

Distance – 3km from the city center 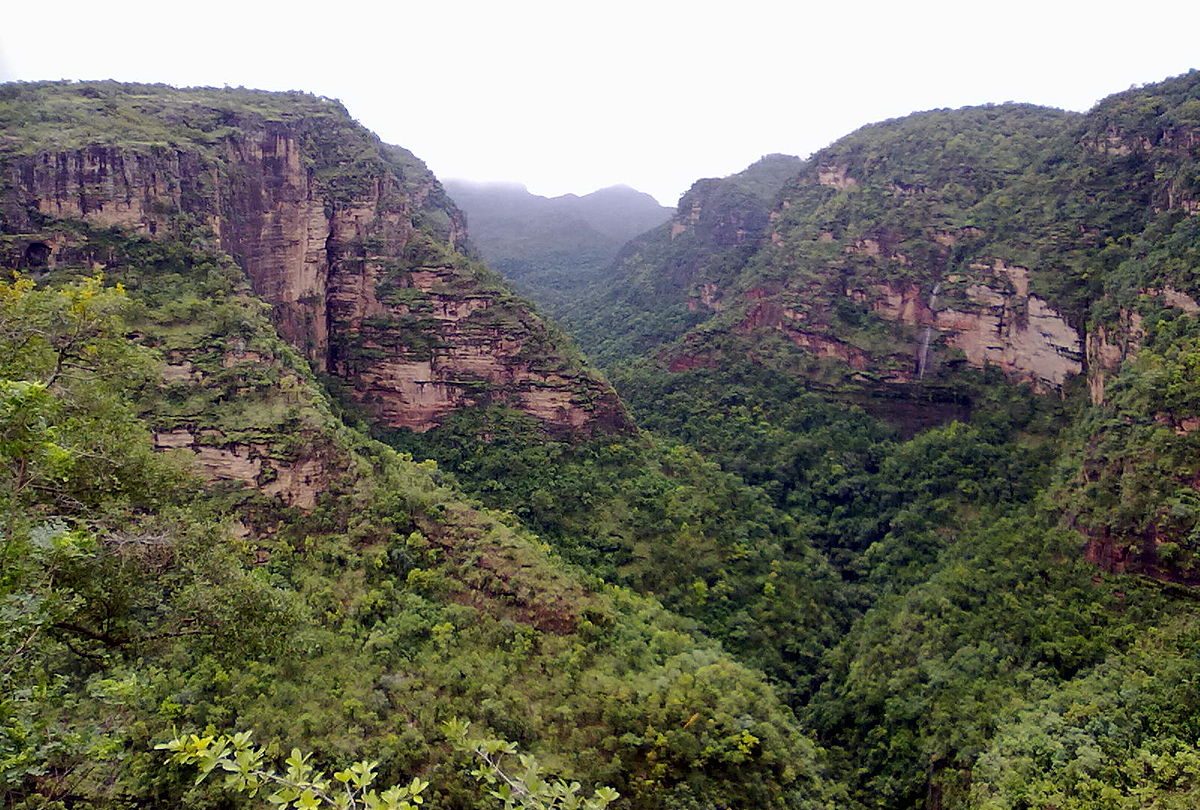 Mahadeo peak is situated at an altitude of 1363m in southern Madhya Pradesh is the famous and highest point in Pachmarhi. You can visit the sacred place of Lord Shiva that holds a divine idol in the cave temple of Gupt Mahadev. It is considered to be one of the most beautiful Shivalingams in the country. Apart from Gupt Mahadev, this temple house has another holy place dedicated to Lord Shiva which is Bade Mahadev.

Distance – 10km from the city center 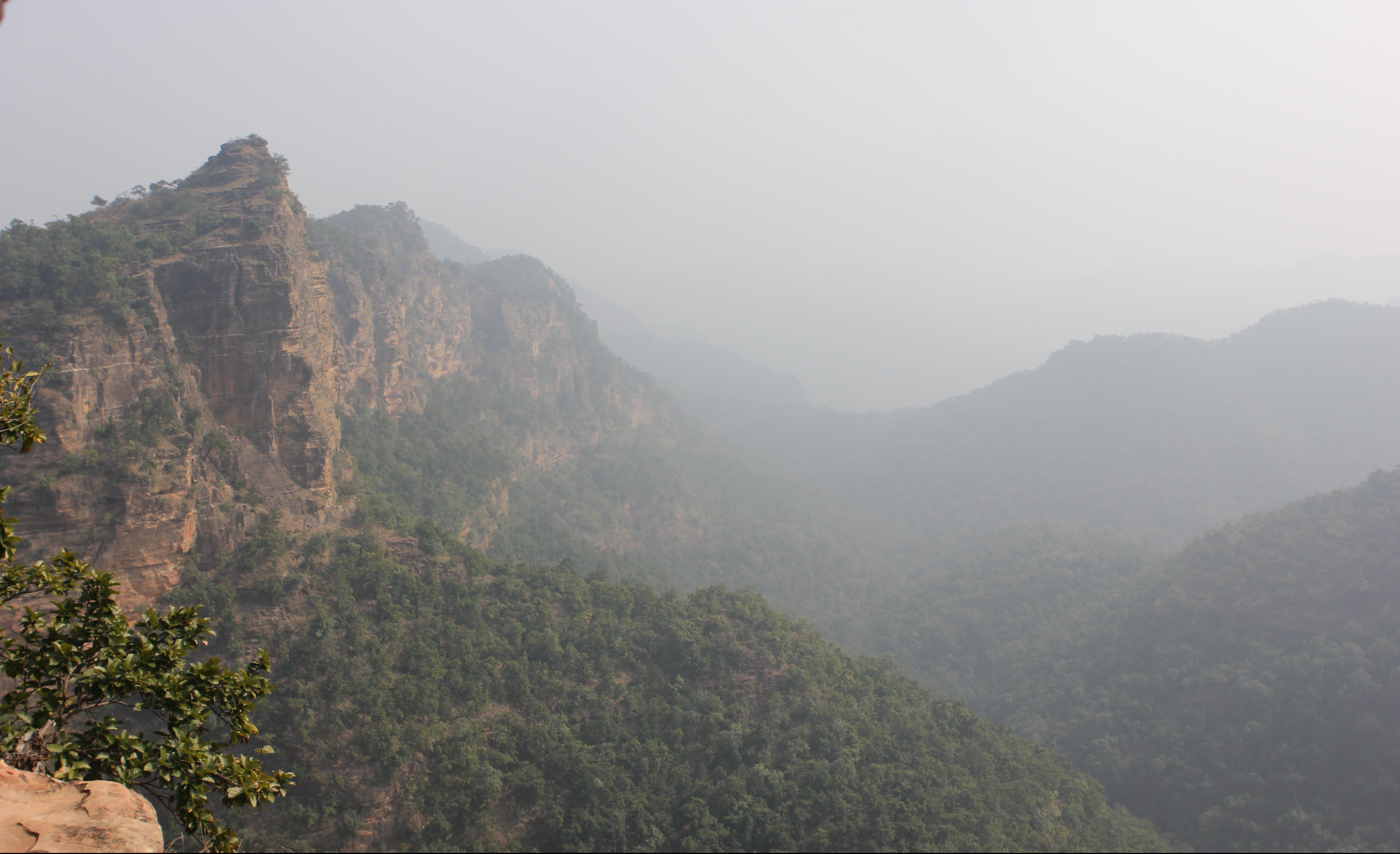 This is the viewing point from where Captain James Forsyth discovered Pachmarhi in the year 1857. It was named as Forsyth point after Captain James Forsyth.  Priyadarshini point gives an entire view of the hill station and its tranquil location. It kept you engrossed in its incredible sight view.

Distance – 7km from the city center 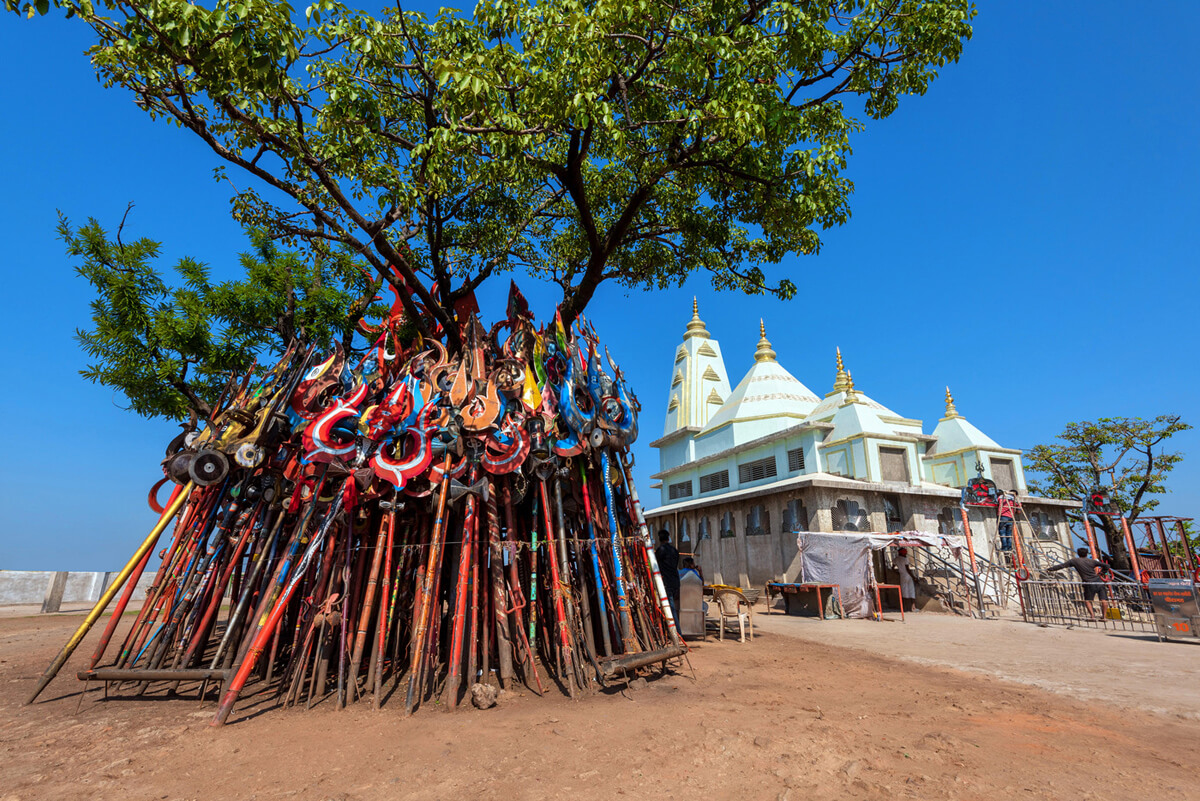 Chauragarh Temple is idolized Shiva shrine at the peak of the Chauragarh hill in Pachmarhi. Shiv devotees have to climb nearly 1300 steps to reach the temple at the crest. It is also regarded as Chota Mahadev a holy place dedicated to lord shiva. Reaching chauragarh is not as easy as it seems to be. It is a combination of 4 mountains and you have to cover this distance by climbing steps. The view of the sunrise from here is quite breathtaking, so are the surrounding forested valleys. It gives you a feeling of victory when you cover this huge distance and reach your destination that is Chota Mahadev temple.

Distance – 15 km from the city center

Deep inside the dense jungle of Pachmarhi, Apsara Vihar is an inviting place with a serene waterfall, which is 30 feet in height forming a pool of cold water beneath. This is one of the most popular picnic spots to take a break and spend some time splashing in the water. It is the perfect place to invest your time and have some unusual fun.

Distance – 2.6km from the city center 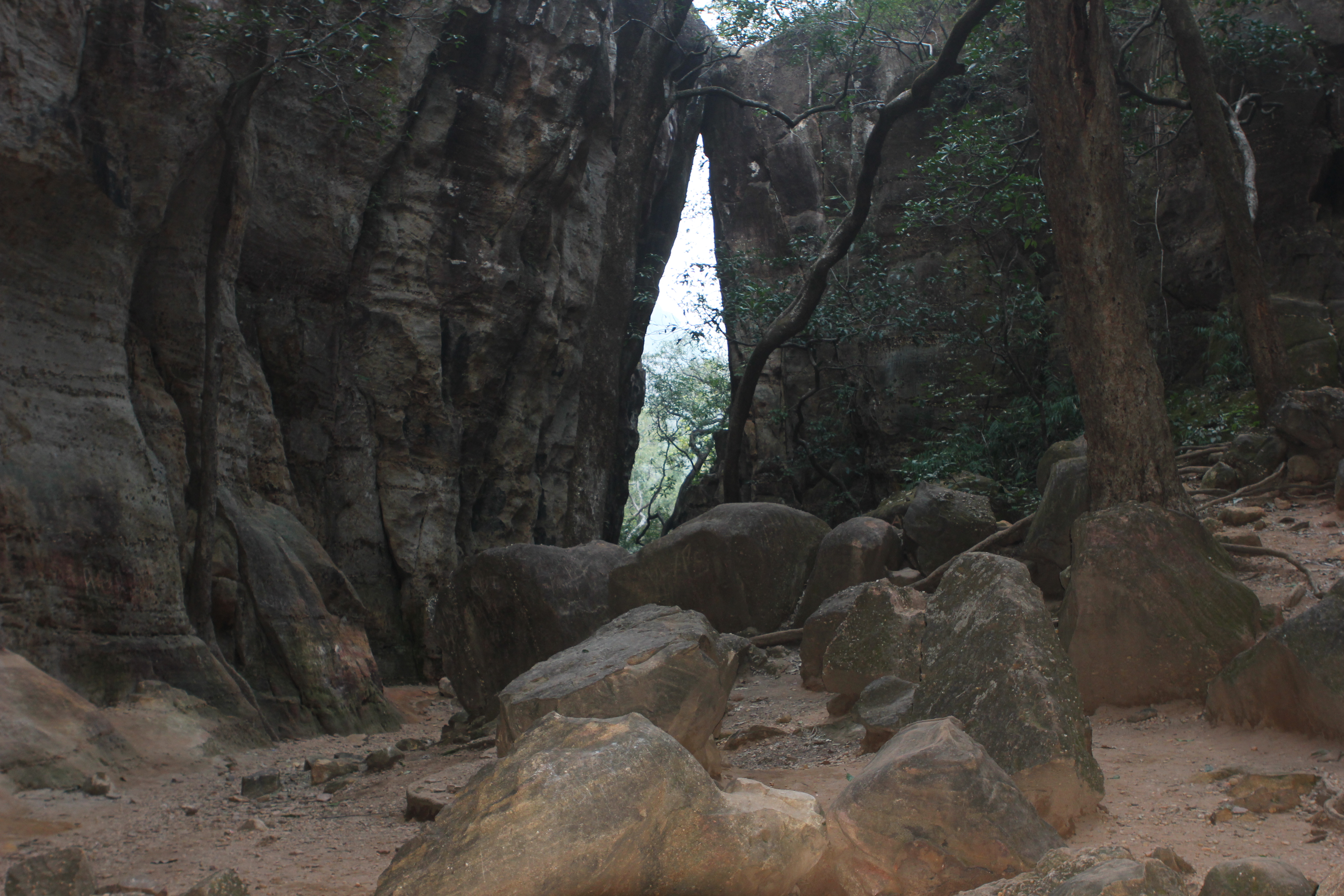 Reechgarh is a huge cave concealed within the pleat of the hill of Pachmarhi. The myth says that once a vicious bear which is known as “Reech” used to live in this cave. The adventure in passing through a narrow hill by adjusting your body which opens to a landscape into the woods is what you get at Reechgarh. The ridge opens to the other side of the mountain and it is a great feeling to have done it.

Distance – 4.5km from the city center 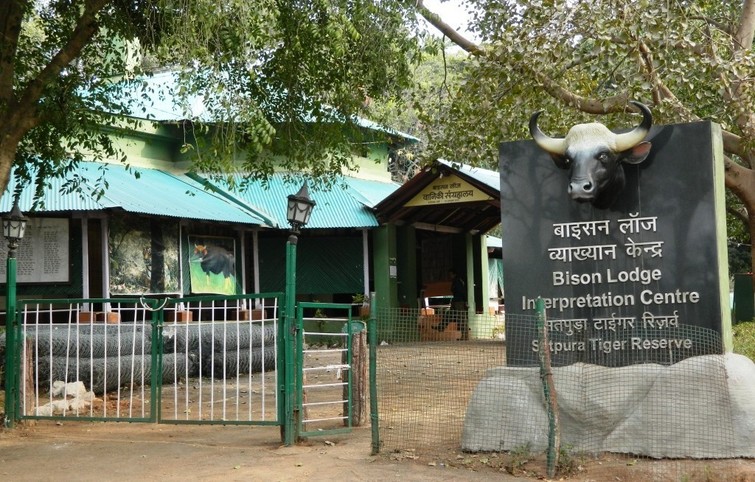 Bison Lodge is a well-maintained museum which is also a starting point to collect entry tickets to travel forest areas. Once it was used to be the former residence of British man Captain Forsyth, who came across Pachmarhi in 1857 and settled down here. The Museum is a grand display of pictures, models, and samples of the flora and fauna of the place. It is the oldest place in Pachmarhi.

Distance – 2.5km from the city center 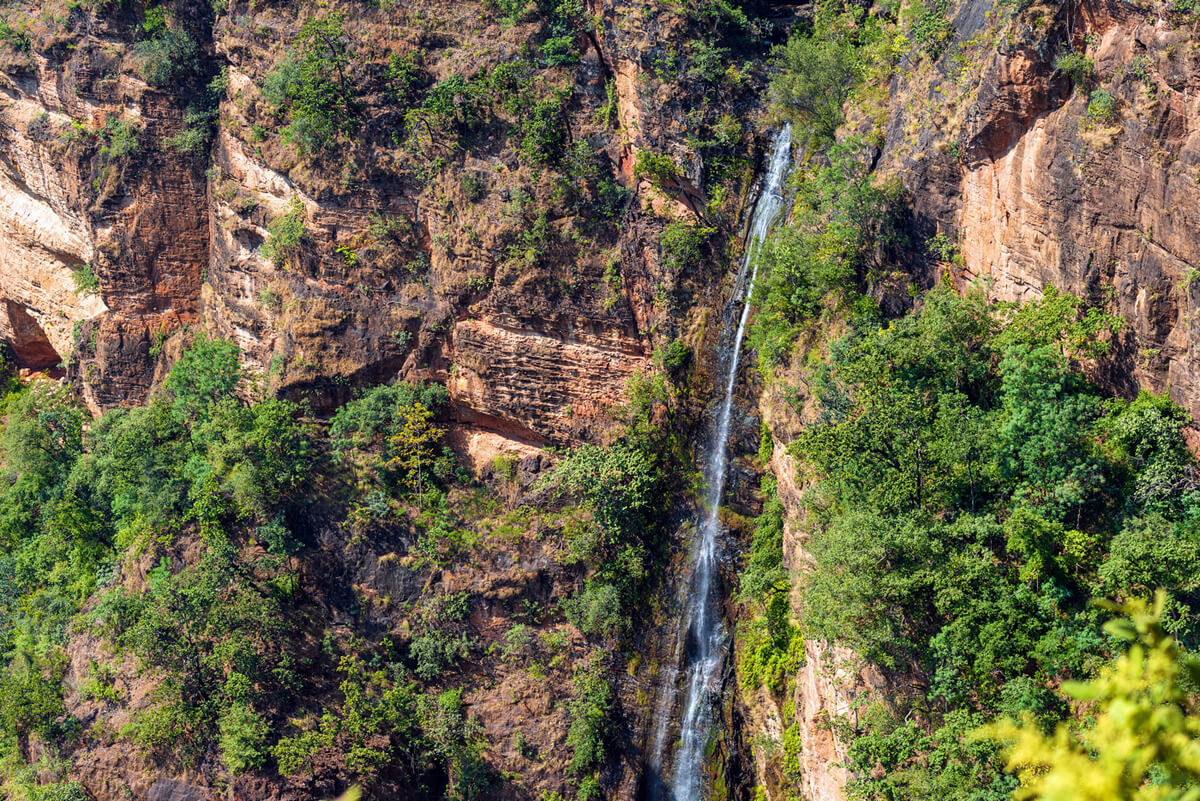 Rajat Prapat waterfall tears through the rugged hillsides of Satpura and the greenery from a height of 350 ft falls straight into the forest. When it falls from a height it looks like a stream of shining silver hence name as silver fall. A magnificent view can be a witness when you reach this spot. It is one of the highest and satisfying spots to visit in Pachmarhi.

Distance – Around 5km from the city center

Pachmarhi is one of the interesting spot to visit in India. Explore this heavenly location and witness some unique creation of nature. Don’t leave an opportunity to capture and adore such a delightful location.

A Complete Guide on How To Plan a Perfect Trekking

10 Best Wildlife Safari In India to visit in Holidays

10 Beautiful Deserts Around The World

Hello, people there! We Kylie and Vicky (Vikram)  two travelers behind the thought of this travel blog. We were always passionate about traveling to variant places more…
Contact us: info@travelspassion.com 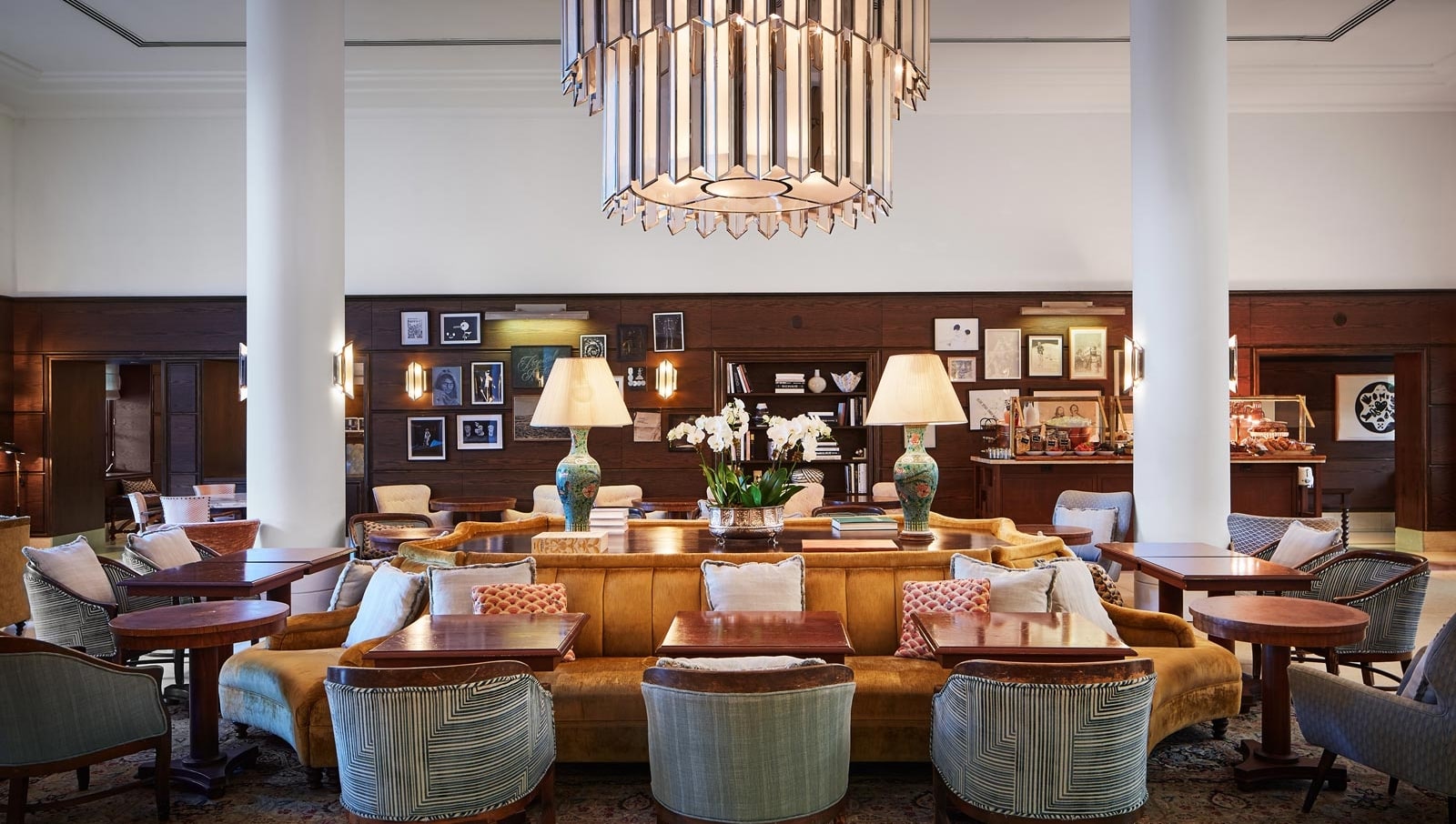