Home Destination 12 Most Beautiful Waterfalls You Must Visit 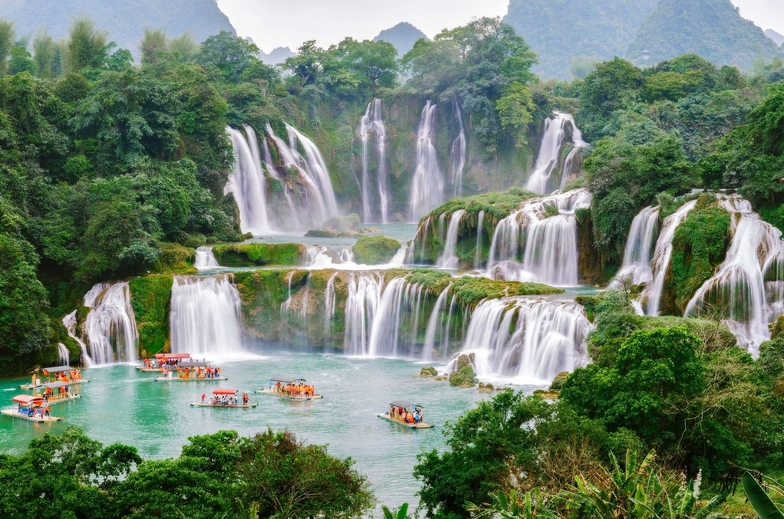 Nature always has a lot to offer to you, so does the exquisite waterfalls. Sometimes falling may make you beautiful and this is what exactly happens with waterfalls, where the water always takes a scenic route. So if you ever wish to appreciate the beauty of waterfalls then these are some of the waterfalls you must visit which will surely portray a look of ecstasy on your face. 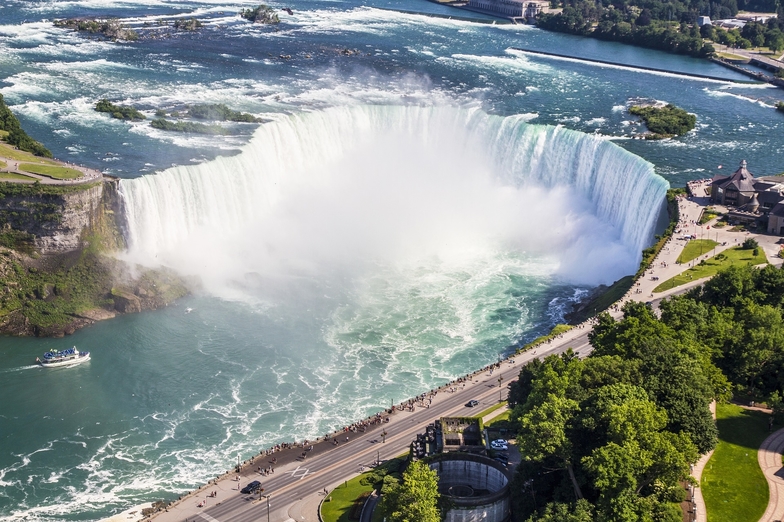 At the southern end of Niagara Gorge, between the Canadian province of Ontario and the US state of New York lies the Niagara Falls. They are categorized by three names: American Falls, Bridal Veil Falls, Canadian Falls. And are collectively called as “Niagara Falls”.

Location: Along the border of Ontario, Canada, and New York, United States 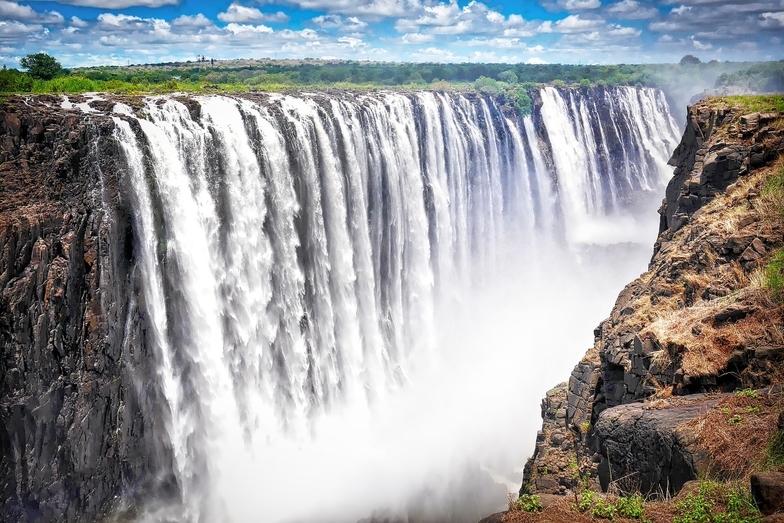 In southern Africa on the Zambezi River at the border of Zambia and Zimbabwe lies the Victoria Falls. While it is neither the highest nor the widest waterfall in the world, it is classified as largest based on its width of 1,708 meters (5,604 ft) and height of 108 meters (354 ft) resulting in the worlds largest sheet of falling water. Victoria Falls is rough twice the height of North America’s Niagara Falls. 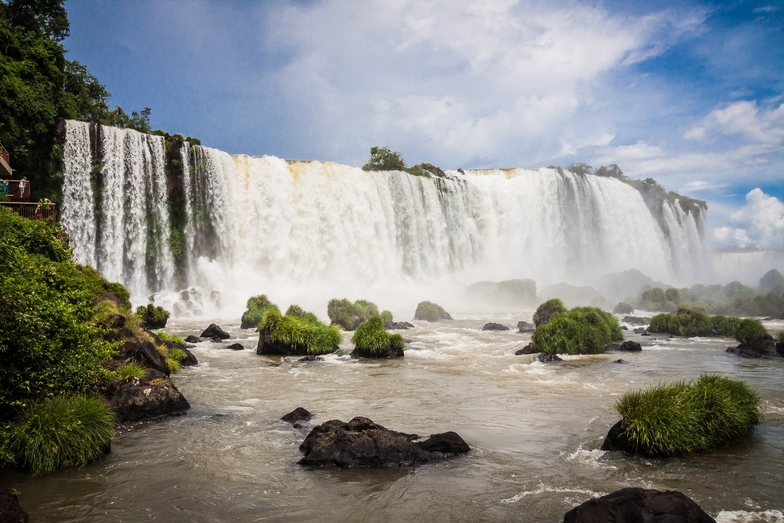 Iguazu is a waterfall of the Iguazu River located on the border of Argentina and Brazil. The name “Iguazu” means “big water”. Numerous islands along the 2.7 km long  (1.7 m) edge divide the falls into many discrete waterfalls and cataracts that normally vary between 60 to 82 meters (197 to 269 ft) high. 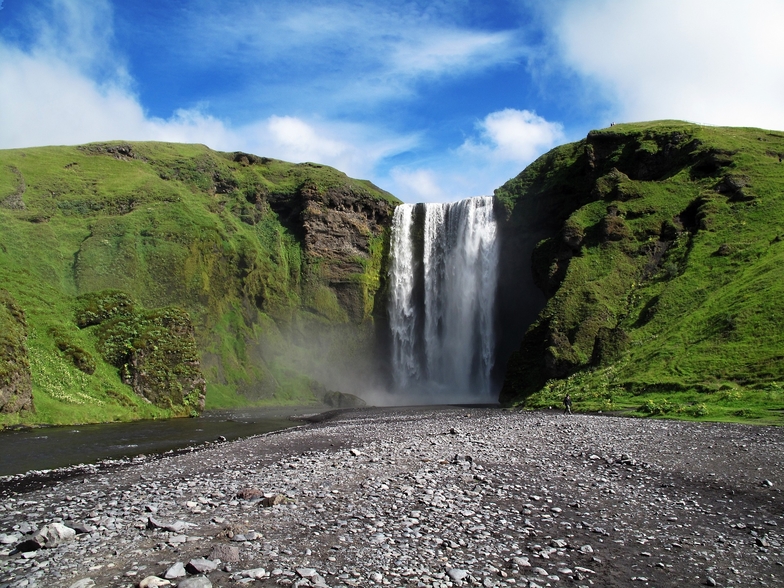 With an astounding width of 25 meters and a drop of 60 meters, skogafoss is one of the biggest and most beautiful waterfalls in Iceland. The water comes directly from two glaciers. This waterfall often produces a single or double rainbow on sunny days. Skogafoss is an impressive curtain of glacier meltwater falling from the cliffs of the former coastline. After the coastline had receded, the former sea cliffs remained parallel to the coast over hundreds of kilometers, creating together with some mountains a clear border between coastal lowlands and the highlands of Iceland. 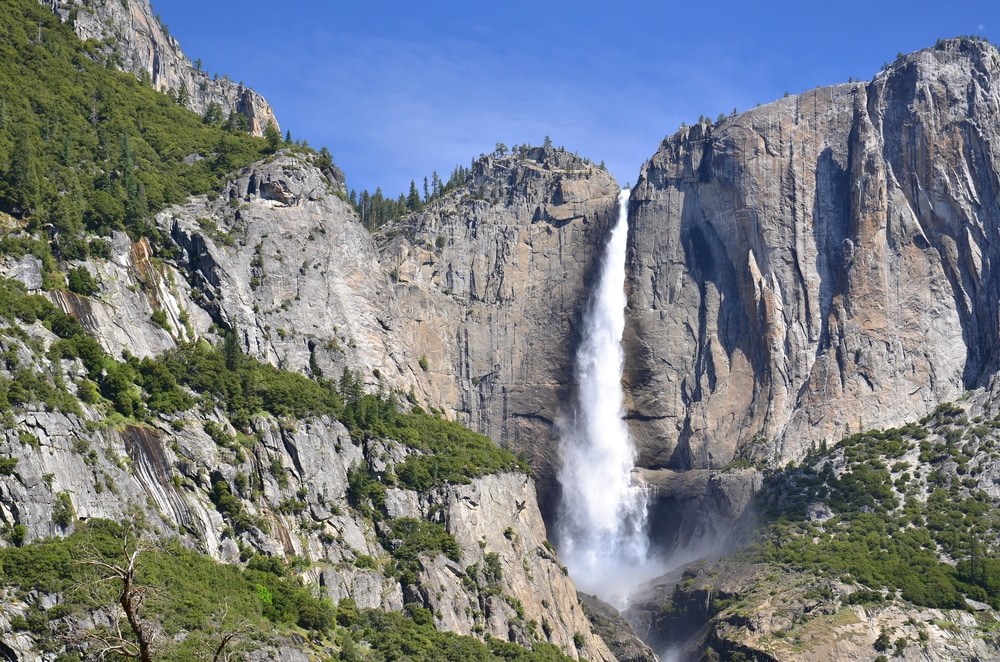 Located in the Sierra Nevada of California, the Yosemite is one of the tallest waterfall in North America and fifth highest in the world. Yosemite Falls is one of the major attractions of Yosemite National Park. Its three separate falls drop a total of 2,425 feet-nearly half a mile. The best time to experience Yosemite’s waterfalls is usually spring when the winters massive melts away and the water flow is at its peak. There is a sound of crashing water throughout eastern Yosemite Valley and a colorful rainbow can be seen. 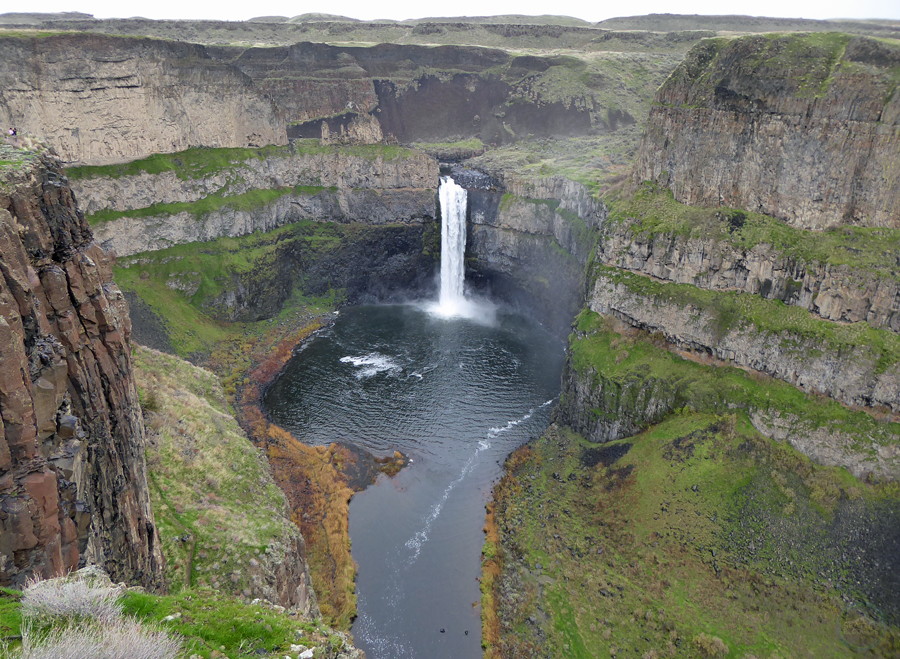 Located in the Palouse Falls State Park in the Washington State, Palouse Falls is a magnificent sight. The drop of 200ft (60m) is a spectacular and the hike around the back of the falls offers amazing views. According to the story of the Palouse tribe, the Palouse River once flowed smoothly into the snake. But four giant brothers in search of the mythic creature called “Big Beaver”, speared the great creature five times. Each time Big Beaver was injured, he would hollow out the canyon walls causing the river to bend and change. The fifth time he was speared, he fought the brothers valiantly and tore out a huge canyon. The river toppled over a cliff at this point to become Palouse Falls. The serrated canyon walls show the deep marks of Big Beaver’s claws. 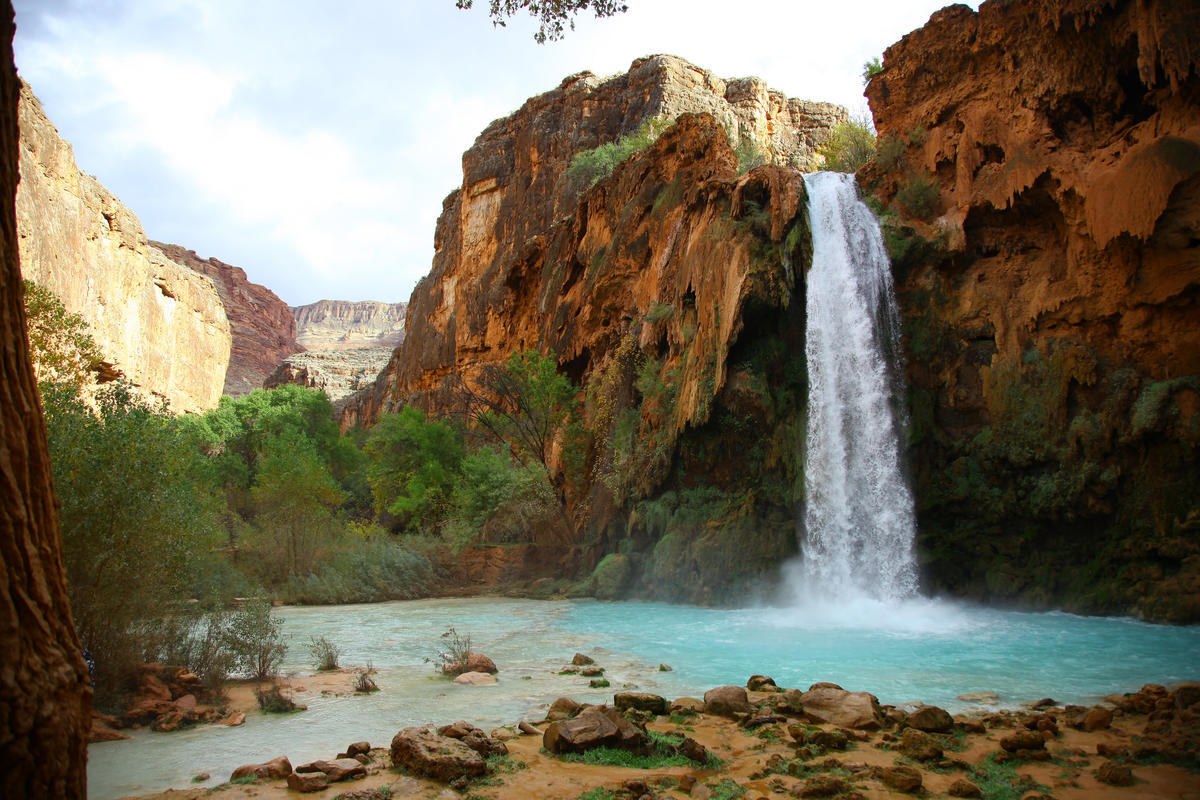 Havasu falls ( also known as Havasupai falls) is a blue-green waterfall hidden in the Grand Canyon, Arizona, within Havasupai tribal lands. It consists of a one main fall that drops over a 90 ft (27m) to 100ft (30m) vertical cliff into a large pool. Due to the presence of high mineral content in the water, the configuration of the falls is ever-changing and sometimes breaks into two separate channels of water. 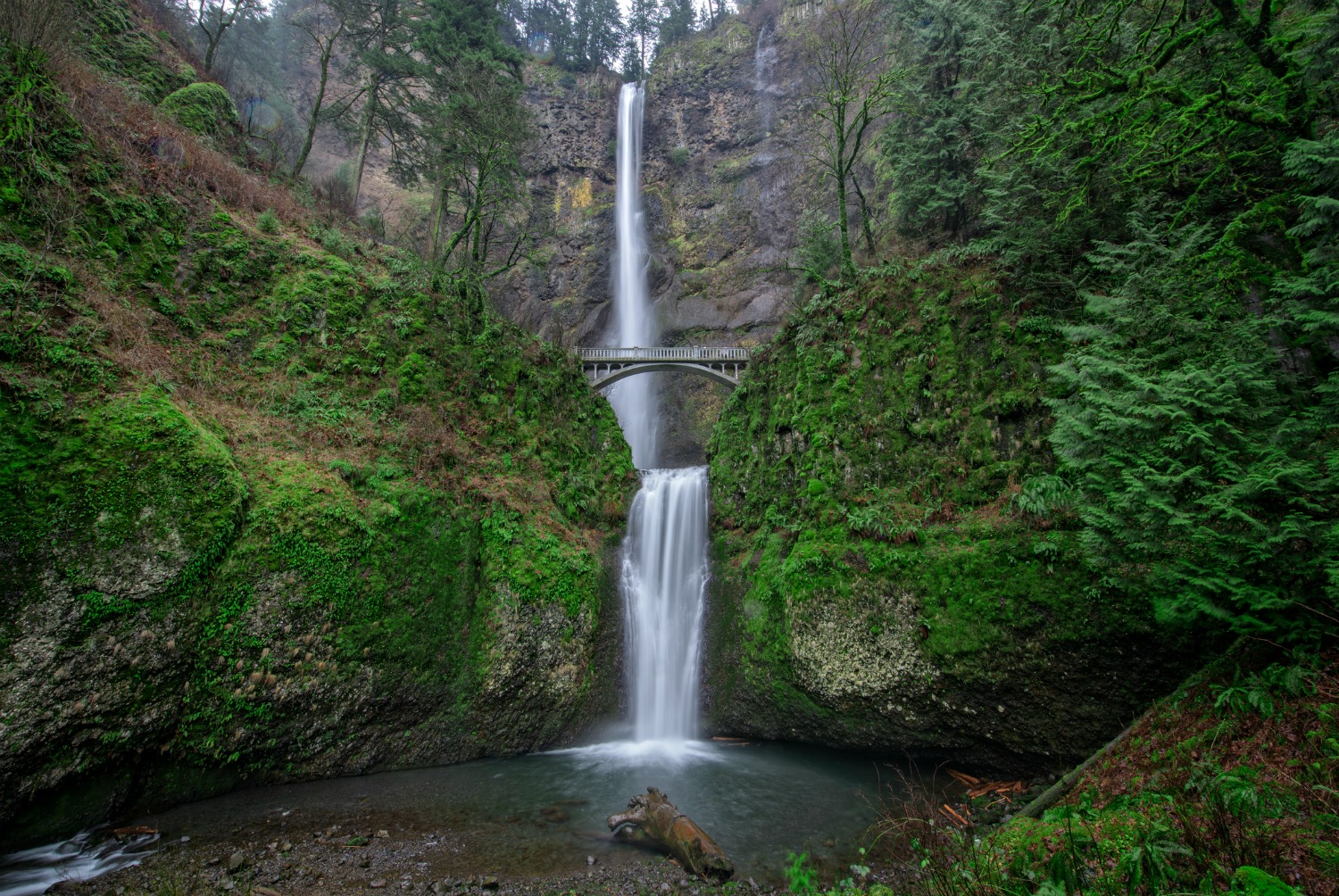 The second highest waterfall in the United States, Multnomah Falls is located on the Oregon side of the stunning Columbia River George. The flow over the falls varies and is usually highest during winter and spring. The water here  falls  into two major steps, split into an upper falls of 542 feet (165m) and a lower falls of 69 feet (21m), with a gradual 9 ft (3m) drop in elevation between the two, so the total height of the waterfall is conventionally given as 620ft (189m). 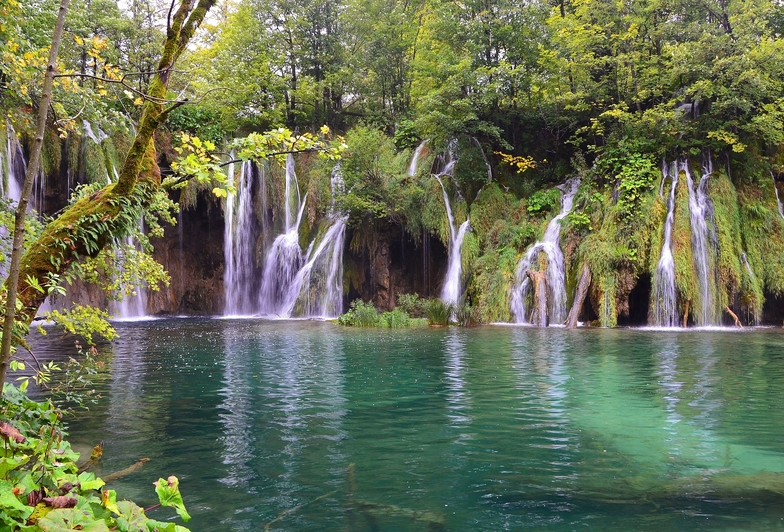 Plitvice Lakes Park is situated in central Croatia, at the border with Bosnia and Herzegovina. The beauty of the National Park lies in its sixteen lakes,inter-connected by a series of waterfalls and set in deep woodland comprising of some species of deer, bears, wolves, boars and rare species of birds. The national park covers a total area of 300 square kilometers (74,000)acres, whilst the lake joins together over a distance of 8 km(4 miles). There is also quite an altitude difference-the highest point is at 1,280m (4,200 ft), the lowest at 380m(1,250 ft)- although the total height difference between the lake themselves is only 135m (440 ft). Veliki Slap, the largest waterfall, is 70m (230 ft) tall. 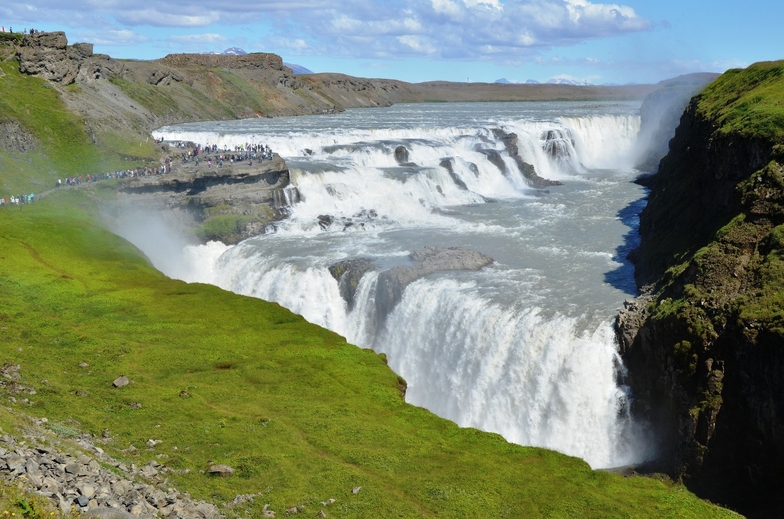 Gullfoss is the waterfall located in the canyon of the Hvita river in southwest Iceland, and originating at Langjokull glacier about 40km to the north. Glacial water is brownish in color since it carries lots of sediments that the glacial ice has carved off the earth. Gullfoss means “Golden Falls” because on a sunny day the water plunging down the three-step cascade and then tumbling two steps down into the 32m deep crevice truly looks golden. 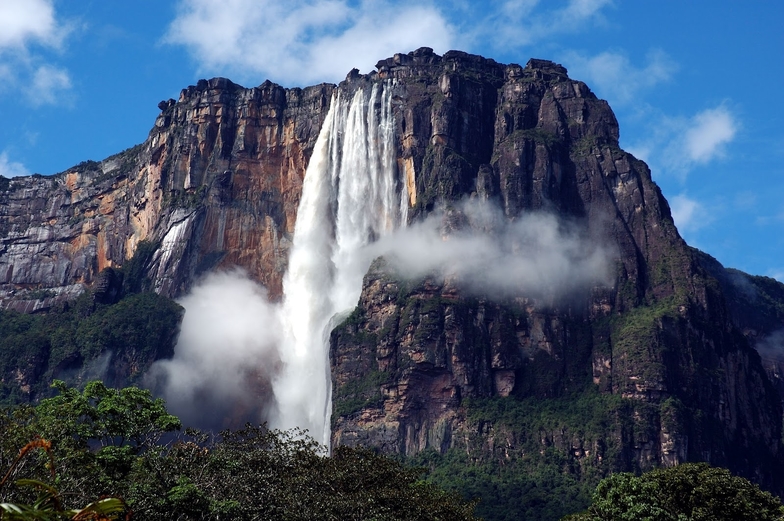 Angel Falls is a waterfall in Venezuela. It has a height of 979 meters and a plunge of 807 m and is considered as the world’s highest steady waterfall. The falls, first sighted by outsiders in the 1930s, was named for James Angel, an American adventurer who crash-landed his plane on a nearby mesa in 1937. 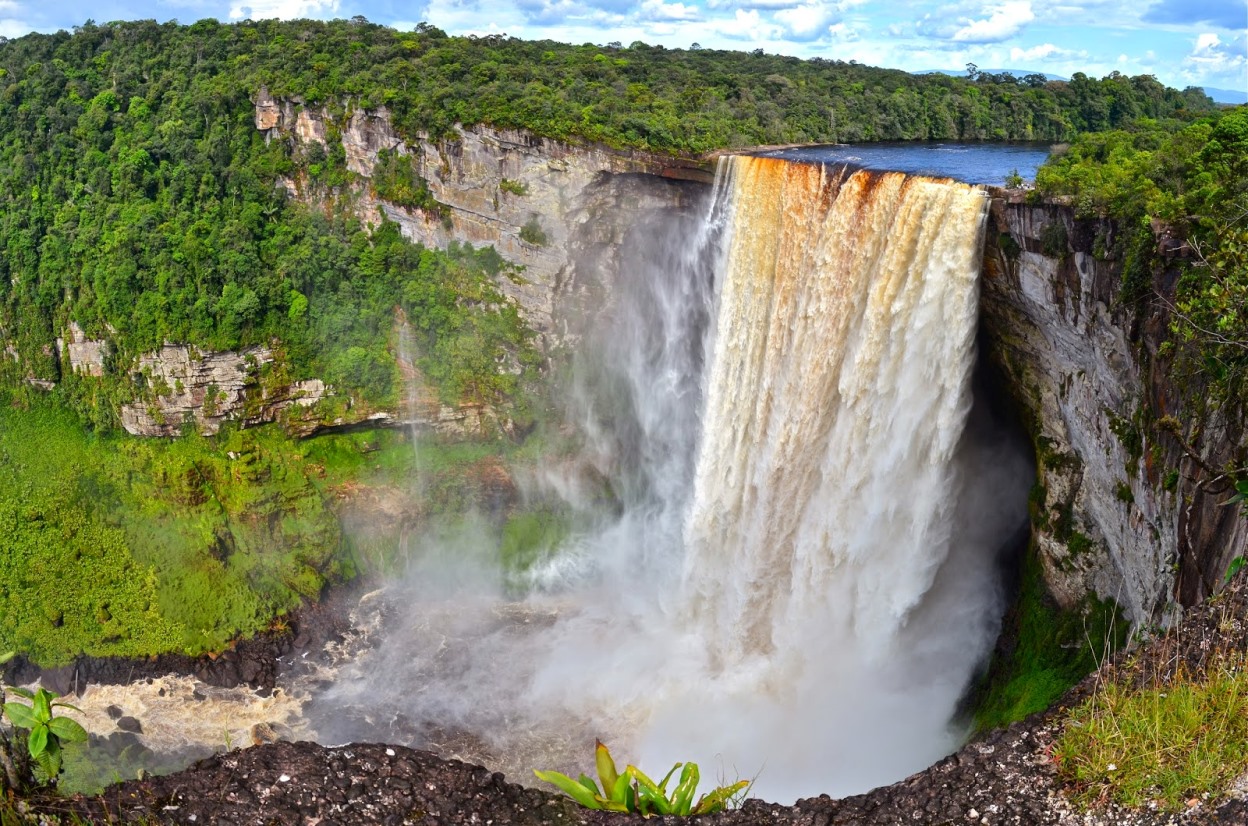 The Kaieteur Falls is the largest single-drop waterfall in the world and it is in Amazon Rainforest. It is approximately five times higher than Niagara Falls and almost twice as high as the Victoria Falls when comparing its height and volume, making it one of the most powerful and majestic waterfalls in the world.